When I was pregnant with my first daughter, I worked in an office downtown that was a quick walk to a Indian and Pakastani restaurant.  At least four days per week, I ordered what the owner called Spinach Cheese Naan and his wife would bring me this delicious flatbread stuffed full of spinach, cheese and roasted coriander seeds.  When I shared with my OB that I was craving these things, she remarked that my body was craving calcium and iron.  When you see the stats below, you will see that I was getting all kinds of vitamins and minerals in this meal.
The restaurant closed several years ago and while there are several places where I can find Indian food, none of them carries Spinach Cheese Naan.  After returning late last night from travel (which included a trip to a Trader Joe's since we have none locally) I wanted something quick and easy.  I threw this together and, really, I was home again.
INGREDIENTS:
1 piece Trader Joe's Garlic Naan (Indian Flatbread)
1 ½ cups chopped, frozen spinach
38 grams sharp cheddar cheese, shredded (approximately 1/3 cup)
1 teaspoon coriander seed
2-3 black peppercorns, to taste
1 - Place chopped, frozen spinach in microwave safe bowl and cook on high for 3 - 4 minutes or until warm and liquid as "cooked off."  If you need to, squeeze remaining liquid out of spinach with a paper towel.
2 - Place underside of Naan under broiler for about one minute or until crispy. Watch it so that it doesn't burn.
3 - Top Naan with Spinach and then cheese.
4 - Using mortar and pestal or spice grinder, smash together coriander and peppercorns.  Sprinkle over cheese.
5 - Place under broiler until cheese has melted and spinach and uncovered bread are warm and slightly crisp.  Watch constantly as this should take no more than a minute before it burns. 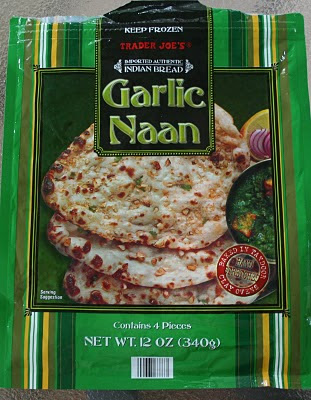 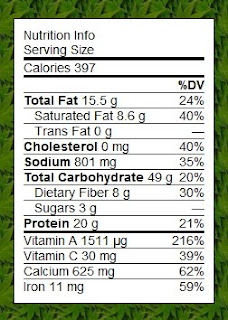 Posted by The Country Tart at 2:04 PM