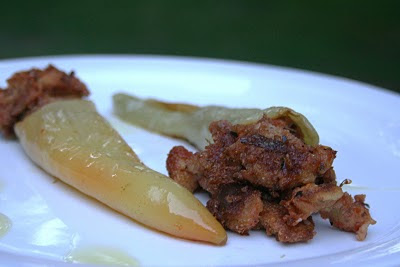 I have been eating a version of these peppers since I was a child, as did my mother, and did her mother. My great grandmother's recipe, there is little fuss to them which, I believe, is what makes them a great example of peasant cooking at it's finest.

Don't let their hardiness fool you--these are actually 100 percent animal-free and cound be served to vegans and meat-and-potato-types alike. A pepper that is not nearly as popular as the more boring green bell variety, these are often easily picked up at roadside stands for next to nothing. I grow them in containers in my front yard and one plant easily yields 6-10 peppers.

1 - Preheat oven to 400 degress.  Meanwhile, wash and cut pepper tops off on a bias, as pictured below: 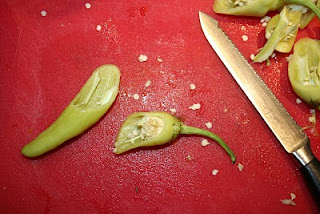 2- Clean the seeds out of the inside and discard the tops (or save for flavoring grains or soups later on).

3 - Mill the tomatoes.  The objective here is to liquify them and you can either use a food mill, a blender, an immersion blender or a food processor.  Oregano can be added during this step, before breaking up.

5 - Mix in tomato and oregano into bread thoroughly.  You will need to use your hands and really get messy. 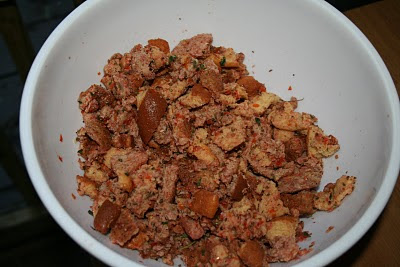 6 - Take some of the mixture and, using finger, stuff deep into the pepper.  Place in glass baking dish and ball up a nice handful of pepper to press onto the top of the pepper.  Continue to do this with remaining peppers. 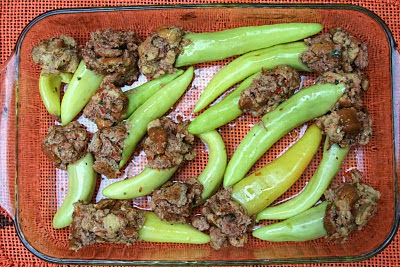 7 - Drizzle peppers with olive oil, making sure to get some oil on the filling and flesh of each pepper.

8 - Bake for 20 - 25 minuts or until peppers are soft and beginning to brown. Stuffing shold be crisp but not over-cooked.

*Traditionally, this recipe is made with stale, crusty bread, however, sometimes I will make this with a combination of wheat, whole grain and sprouted grain breads to increase the nutritional value of this recipe.  Certain breads, such as sprouted grain breads, do not hold up well in stuffing and thus should be kept to 1/4 of the ingredients.  Nutritional data, below, is for recipe made with: 2 slices Ezekiel bread, 2 spelt English muffins, 2 slices potato bread and 2 slices of 100% whole wheat bread.   Also shown in photo at top of page. 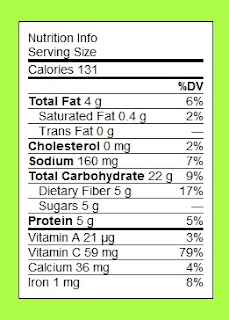 Nutritional data created using ingredient compilation and is deemed close but not exact. 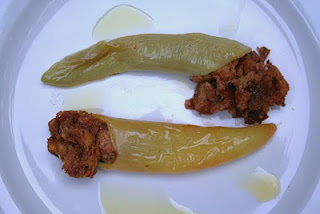 Posted by The Country Tart at 9:07 PM